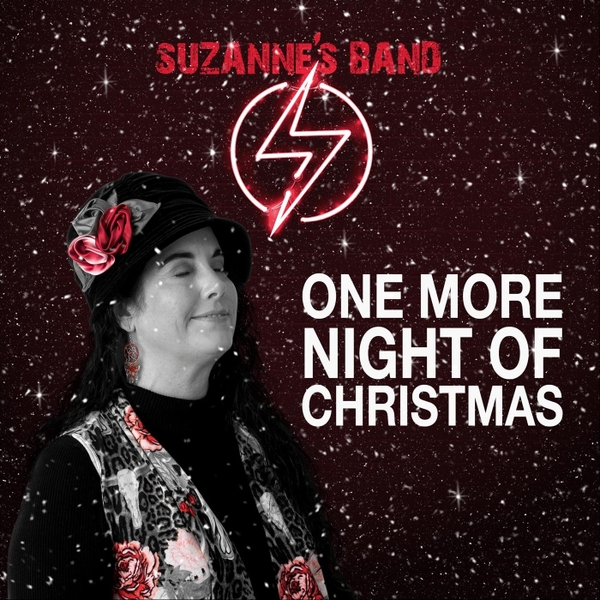 Holiday songs are often a tough sell even for the most talented and well-known of artists in the game today, but in the case of Suzanne’s Band’s take on “One More Night of Christmas,” it doesn’t take much more than a cursory examination of its melodic patchwork to fall in love with the group’s trademark tonality. “One More Night of Christmas” is an accessible pop song with a wintry groove, fragile harmonies and a singer in Suzanne herself who has demonstrated a lot of wit and wisdom from behind the microphone recently but takes her sound to a higher level in this latest release. Simply put, fans both old and new alike would be wise to take note of this single as a sign of the magic still to come from the Suzanne’s Band brand.

“One More Night of Christmas,” like most songs by this group, features a really folky vocal style, but the structure itself is contemporary pop in almost every way. The beats are supple and smoothly adjoined with the melodic elements in the foreground, but the two never get clustered in the mix – the track is too well-produced for that to happen. The crisp quality of the instruments aside, Suzanne’s crooning is what keeps us glued to our speakers more than anything else does in this single, and though it’s perhaps not her most balanced composition to date, it’s undisputedly one of the most exquisite vocal showcases that she’s released thus far in her career with this band.

Instrumentally speaking, “One More Night of Christmas” is uncomplicated and simplistic, but to be perfectly frank, it doesn’t need to be super elaborate to make a big impression. With all of the gusto that the players are putting into the music, we’re able to take as much from the texture of their harmonies as we are the content of Suzanne’s words, which is a combination that is far from easy to find when browsing the top tier of the Billboard charts nowadays. Suzanne’s Band bring a lot of confidence into the studio with them in this track, and for all that it lacks in over the top theatrics and plasticized polish, it more than compensates for in originality, spirited melodic moxie and a tasteful adherence to the parameters of old school pop music.

I only just recently started listening to Suzanne’s Band, but if this is a taste of what the group can do when they’re firing on all cylinders and chasing after a sound as sweet as the season is, I’ll definitely be checking out their work again in the future. There are a lot of ways to take on a Christmas song, but with “One More Night of Christmas,” Mia Suzanne Walker and company don’t overthink anything – they let the melodies lead the way, and in doing so turn in one of the more on-point holiday singles of the year. There’s still plenty of time before Christmas day, but as of now I think that it would be safe to say this is the premier song to beat among seasonal indie releases.