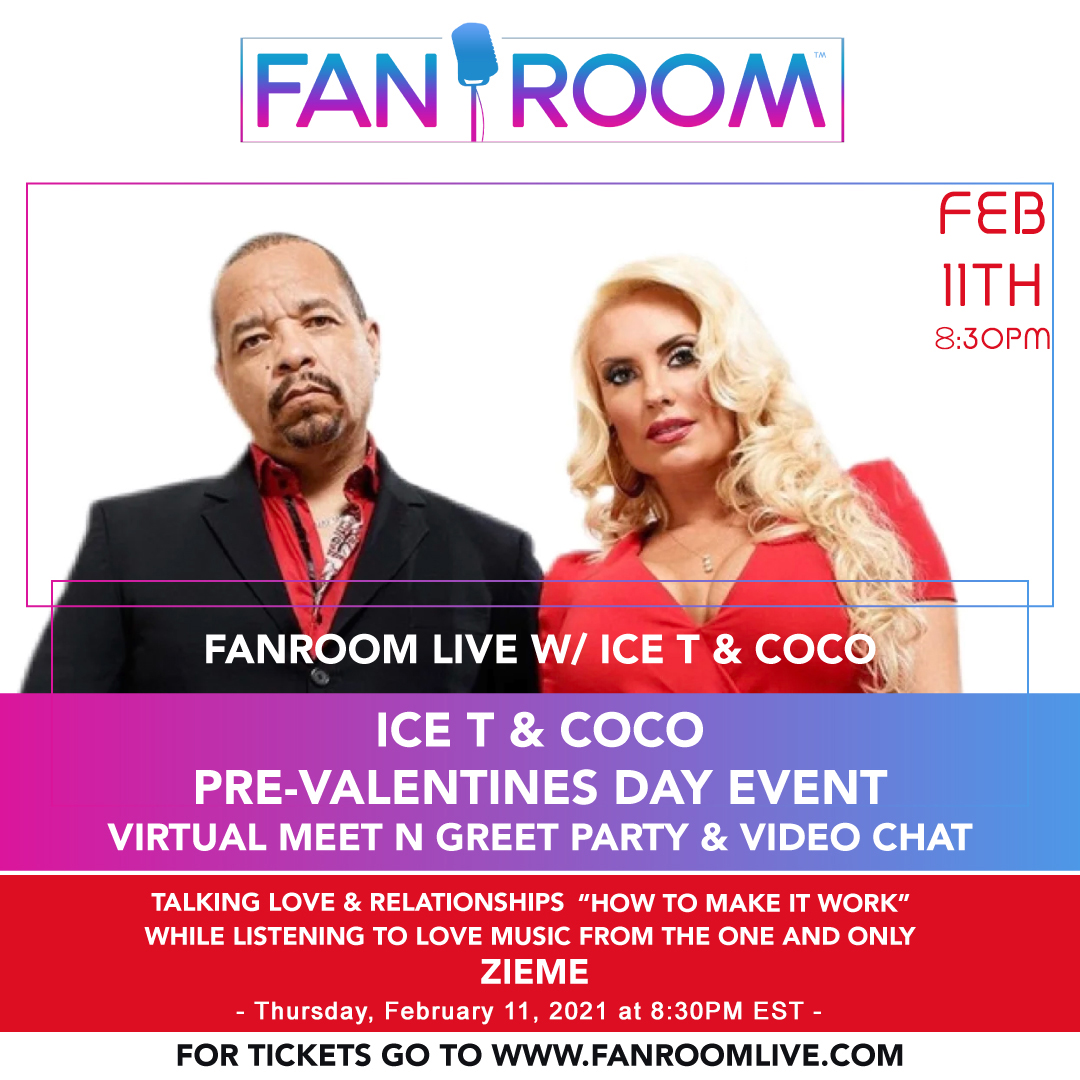 Ice T & Coco will be talking about Love and Relationships, “How To Make It Work” while listening to Love Music from the one and only ZIEME.

Ice T is a world renowned rapper-turned-actor and reality TV star. The “Law & Order: SVU” actor starred in Ice T & Coco, a reality show with his wife, model Coco — a nickname she got at a young age when her brother mispronounced her real name, Nicole. The show followed the couple, along with pet bulldog Spartacus, as they made their way through the Hollywood social scene. Coco, who has been the woman behind the man and the heart of the family’s brand in the couple’s marriage, has established her own career in entertainment while maintaining balance in her marriage.

The FanRoom Live platform helps actors, musicians, comedians, sports stars, and other popular figures engage and interact seamlessly with their supporters virtually. These sessions are always very interactive and more like a meet ’n’ greet and Q&A town-hall-style meetings.

FanRoom is the brilliant collaboration of an actor/producer, talent agent and celebrity event producer in response to the pandemic that stilled the entertainment industry. Fighting boredom, depression and isolation, the public is hungry for normalcy. Cedric the Entertainer, award-winning actor, producer, and comedian, Mich Faulkner, CEO of 123 Talent, and Jeff Krauss, President of event production and entertainment company IE Group, designed a new reality. They brought on Co-EP & host Chanel Omari (CO Productions), as well as, CO-EP and Co-Host, Jae Benjamin. Pooling their talents and resources, they created a solution for staying home and social distancing while getting an intimate entertainment fix for eager fans. Artists connect with fans in ways never possible before. FanRoom Live became an instant success. Previous guests of FanRoom Live include Cedric The Entertainer, George Lopez, D.L. Hughley, Brant Daugherty, Holland Roden, Kurt Angle, Richard Kline, and George Wayne the former Vanity Fair scribe. Up-coming talents who are set to be announced include Morgan Fairchild, Sean Kanan, and a returning Jake The Snake Roberts to give the platform the power to overcome current challenges.

Get your FanRoom Live tickets to meet Ice T & Coco on Thursday, February 11th at 8:30 PM EST by going to  https://www.fanroomlive.com