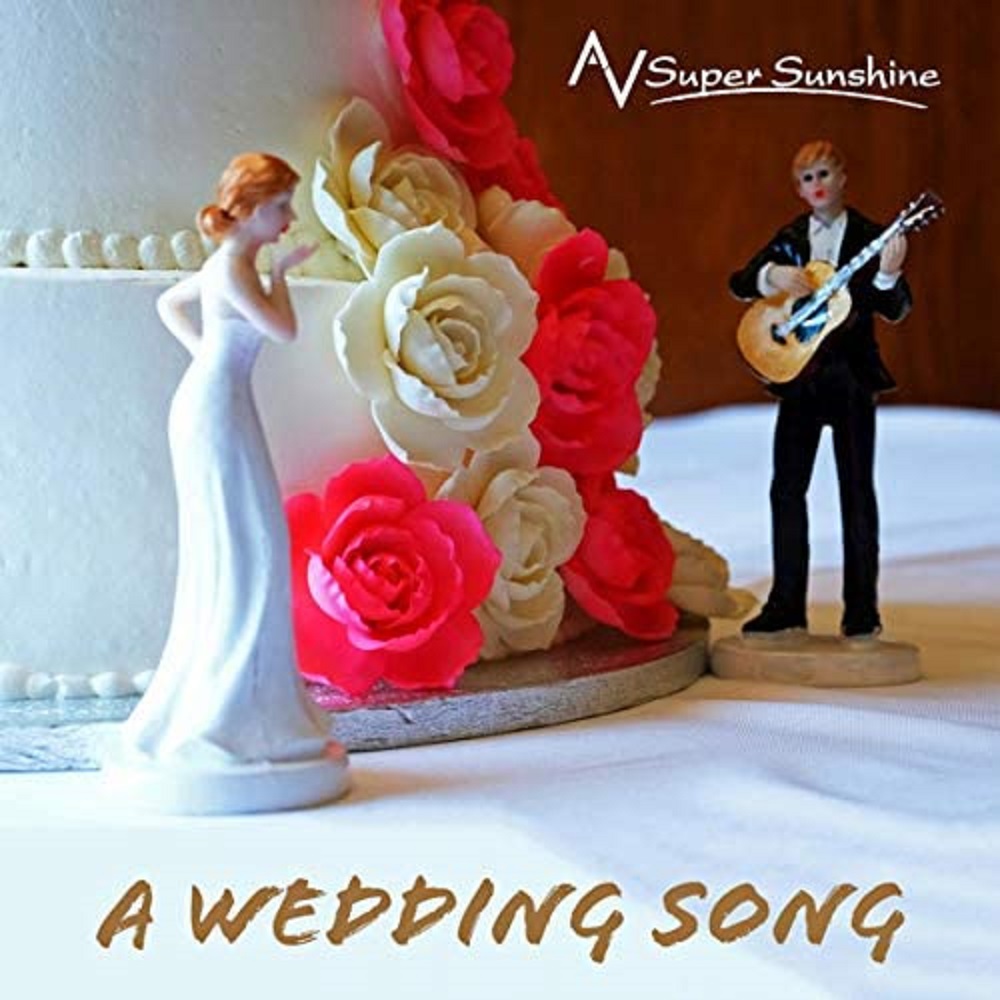 It was initially perplexing as to why AV Super Sunshine’s latest single ” A Wedding Song” in the press kit had a flying saucer hovering over a couple at the end of an aisle. On the Spotify release, it’s a more conventional and subtly thoughtful image of cake toppers standing aside one another. That majestic sense of cosmic presence is littered across their work in some fashion or another, but here it actually starts to make sense when you think of it as an extension of those larger-than-life feelings the band has sung about across their songs even from their first album in 2015.

With “A Wedding Song” we find the band at maybe their most vulnerable. Praising the love of someone in your life the way this song is based on the lead singer/songwriter’s love of his partner both creatively and romantically, Philomena. The song never comes across as a vanity project and partly it’s because of the fearlessness in the performance that you’ll soon be able to catch televised on CBS Saturday, The Kelly Clarkson Show, and more, so keep your eyes peeled for that. The song starts and ends on emotional high notes (literally) as the song begins with a thoughtful and energetic combo of strings and bells and whistles, an obvious metaphorical depiction of the feeling of walking down the aisle.

Across the board the mixing on this is fantastic, knowing when to bring certain instrumentation to the forefront and when to let the vocals do the literal talking. When the singer hits the subtle notes of “I love you, I say I do”, you really feel it with every fiber of your being. In a way, there’s an almost childishness to the whole affair, not that this sounds like something a child would write, but the kind of wide-eyed perspective on what love can be, and in this case, what love is to the people. The lyrics are straight forward as is the composition, but they serve each other incredibly well and really create an inviting atmosphere and in a meta way, the band thanks you for being there as the singer remembers the people in attendance all happy to be apart and how he’s happy that they are there too, a feeling you can easily attach to how he feels about the listener as well.

I’m curious to see how this song will transcribe over to a live performance and could see once the world returns to normal, many people wanting this to be played at their own ceremonies. We’re not sure what the future holds for the group as far as the direction of the band since this year is a blank slate for many as the world inches closer to normality, but if the group wants to be a strong force for good, well I’m all ears (couldn’t help it). I think there’s bound to be plenty of people who pop in their headphones to listen to this and feel the emotions the song conjures, married or not and you can listen to the track now on Spotify.

The music of Av Super Sunshine has been heard all over the world in partnership with the radio plugging services offered by Musik and Film Radio Promotions Division.  Learn more https://musikandfilm.com