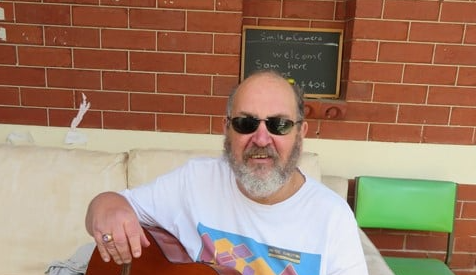 Sam Green and the Time Machine, like many other modern performers, has made great use of the Spotify platform to expand their audiences. Green’s unique synthesis of traditional music, blues, country, and other forms has proven to be a winner among Spotify’s users with an assortment of tracks receiving the most attention. These specific performances are culled from a cross-section of Green’s songwriting over an impressive five-year period. This half decade saw Green maintaining a multiple release a year schedule and these aren’t trifling affairs. Either Green mined a large backlog of previously unrecorded material or else experienced a prodigious and eyepopping burst of creativity, but either way we’re left with quite a bounty in his ten most popular songs alone.

“For the Ocean” from 2013’s I Think It’s About Time is an excellent example of Green’s poetic skills seamlessly merging with his songwriting talents. It has a hard-charging pace while retaining a light touch from beginning to the end and Green’s evocative vocals are well suited to his lyrical message. “Have the Seasons Changed?” from 2013’s Players All Are We is a one hundred eighty degree turn from the style and substance of the preceding track. Green tackles the acapella style with the same self-assurance we hear from the far more traditional “For the Ocean”. Despite the unusual approach, there’s nothing about this performance smacking of novelty or gimmicks.

Another track from the same album has garnered a lot of well-earned attention. “Carmella” has a buoyant spirit thanks to the improbable inclusion of accordion. Green’s vocals bring the right amount of verve to the track as well. It has a rather bare bones arrangement, a characteristic of many Green songs, but nonetheless sounds remarkably full. “Sperm Whale” from 2017’s album Love, Love, Love is a delightfully straight-forward track. You can’t help but applaud Green’s willingness to draw inspiration from the natural world without fastening some sort of political agenda or dogma to the track. It is humanist in the best possible way; it celebrates existence and radiates unity. The structure and guitar playing are both top shelf.

“Drowning in a Sea of Life” is a track from 2017’s collection The Time Has Come Again notable for a pair of traits, if nothing else. The half-whispered tone of Green’s singing gives the track a muted desperation lacking in other tracks and its flamenco-inspired guitar gives it much needed sparkle. 2018’s Baked Beans (432 Hertz) produced another popular track, “Broken Hill”, that begs for a fuller rendition. This is a bit more musically realized than your customary Sam Green cut with two guitar tracks throughout the song and has a rousing quality that would work well with a full band backing. Sam Green and the Time Machine’s work goes much further than this, but the aforementioned songs, among others, are representative of his gifts. There’s no question we’ll be hearing more from Green and his collaborators in the near-future and it’s easy to retain confidence he’ll continue working at the same level.