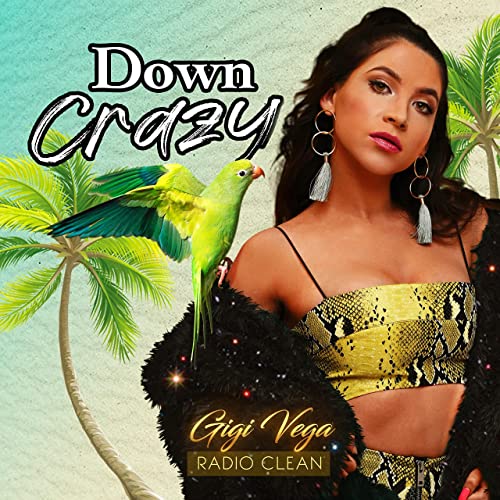 Gigi Vega’s 2020 debut during a pandemic seems, at first glance, a bad time for making an entrance onto the public stage. “Mistletoe Kiss” however proved a notable commercial and critical success. Now, she’s back with another chart-topper, “Down Crazy,” that poises her to pick up where she left off. The song is further evidence that Vega’s performing powers far outstrip her short time in the public spotlight. She is unquestionably the center of this song.

It is important to note, however, that she sings with the track. There are never any designs on her voice dominating the performance. Instead, she wraps her voice around the song’s restless percussion and ornamental instrumental color. The arrangement is spartan but effective. Many listeners will respond to how the beat evolves, and the skeletal melody underpinning Vega’s vocal creates a polished framework for her singing. Vega never oversteps the song’s reach; the length is tailor-made for modern audiences.

The song’s video breaks with tradition. Promotional clips are invariably formulaic collections of jump cuts without any unifying concept. Vega’s video for “Down Crazy” pushes back against that habit. There is a back story for the clip any viewer will relate to and the style embraces a mix of long shots interspersed with the aforementioned jump cuts. It never veers far away from what viewers find familiar but bears a distinctive stamp that many will appreciate.

The song’s production places Vega’s voice at the forefront. It’s never obnoxious though. Clear and ample thought has been given to her placement in the mix. Her lyric phrasing is a low-key foil for the song’s melody and percussion alike. Rather than aping the former, Vega goes in her own direction and imaginatively answers those components of the song. Her lyrics are conversational and direct. She’s shaped the language of the moment to the song’s sound. Listeners, more and more in an increasingly technological world, don’t want pop songs written in stilted language – they want realistic human speech set to music. There’s an intelligence behind it all, and there’s never any sense the song’s words are throwaway.

“Down Crazy” will only accelerate Gigi’s rise. It denotes her as one of those rare talents who sound destined to stick around straight out of the gate, and we’d be fools not to follow her along for the ride. It’s sure to be exciting and entertaining.