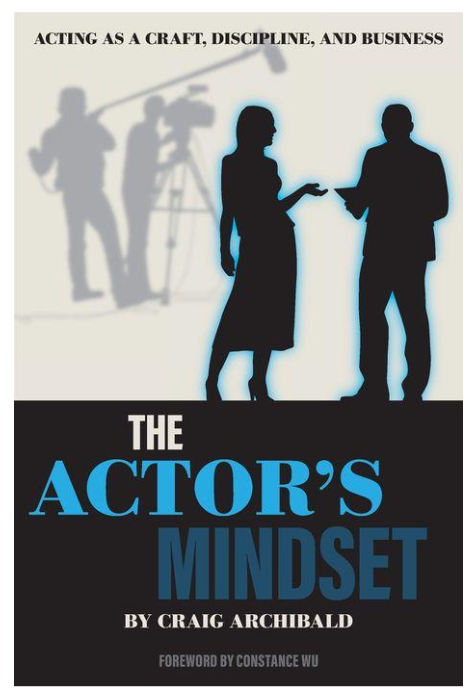 Craig Archibald has released his new book, titled The Actor’s Mindset: Acting as a Craft, Discipline, and Business. Adopting a personal tone over clinical precision, Archibald comes across as a trustworthy, almost big-brotherly figure in how he dispenses of the facts and of the prose. “I came up with this idea after I’d been disappointed by a client’s performance in one of his first feature films. He played the same emotional note throughout the entire film.

To help him, I created what I call the Archibald Workbook, a private book meant for keeping all your notes about the film or television show you’re creating in one place,” Archibald writes. “Buy a blank notebook, preferably one with a cover that endorses the spirit of the script in some way. Make the opening page include both the movie’s title and the event of the movie for the character you’re playing. For example, the movie’s title could be The Kidnapping with the character subtitle reading ‘In which my character takes action to find his son and, in doing so, becomes his own man.’ The title should have meaning and clarity…Add any notes from your homework that you feel are of vital importance to the scene.

For example, in creating an arc to your character’s emotional life through the film, you may have decided that the happiness level of your character in the scene is a five out of ten. You may have decided this because in the next scene, your character is ten out of ten happy. You don’t want to repeat any emotion at a similar pitch to the previous scene. That’s where the term ‘one note’ comes from. By recording your scenes in one book, you make certain you can create an emotional arc to the character you’re playing.”

It’s the kind of advice you don’t just find yourself necessarily applying to acting, but to pursuing anything in life. Archibald is the proponent of the kind of drive that for any hungry soul proves infectious, and he does so with a remarkable integrity and generosity of spirit. There’s never a false note anywhere, and while Archibald being an actor himself could make the cynic call it a fine performance indeed, I can tell the difference between a slick instructing campaign and someone who puts the meaning behind the words. He’s also so generous with the breakdowns, and with the descriptions navigating the various twists and turns of the trade.

“The stage actor is the storyteller…On screen, you’re no longer the storyteller. In film, that’s the director’s job. On television, that task falls to the executive producer/creator/showrunner. The difference is immense. The screen actor has room to relax into the character, to simply do the homework and be,” Archibald writes. “The other major difference is the proximity of the audience. On stage, your audience is at least ten to fifteen feet away. On camera, they’re no more than ten to fifteen feet away. And in a close-up, the audience is less than a foot away. Imagine someone standing twelve inches in front of your face, looking directly into your eyes. How much ‘telling’ or ‘showing’ do you have to do for them to see your thoughts? (Answer: None!)”