Michael Pena might be getting flashbacks watching this … a cop throwing hands with an unarmed civilian, and losing his own gear to get on equal footing.

Check out this wild fight between a police officer and a regular schmoe from the streets … where they both decide to square up and duke out whatever issue they’re having. It’s pretty nuts — the cop actually takes off his vest (but still keeps his gun) to throw down properly. 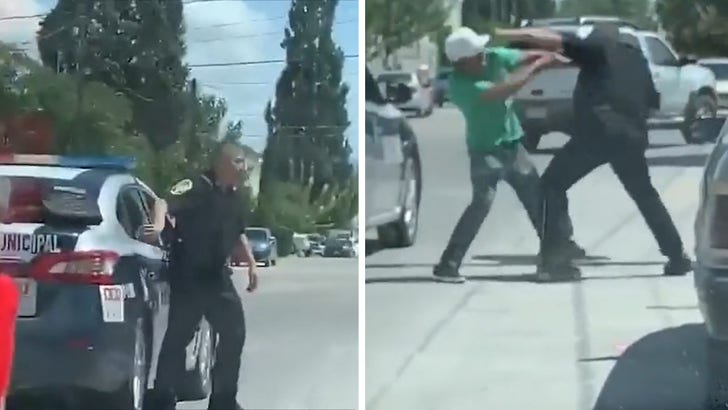 They exchange minor blows for a good while, with the cop seeming to have the upper hand — he’s way bigger for starters — and the dude in green coming back for more each round.

In the end, they appear to leave their differences right there on the pavement … seemingly without further incident. Of course, many have pointed out that this doesn’t look to have happened in the States — where a civilian would surely be busted for scrapping with a cop.

Of course, the other observation here … this is very much like a scene from 2012 movie “End of Watch,” in which both Pena and Jake Gyllenhaal star where they play corrupt cops in L.A. At one memorable point in the flick … Pena’s character, Mike Zavala, brawls with a perp.

Just like the cop here does, he loses a bunch of armor and whatnot — and then lets the fists fly! Talk about life imitating art … or whatever the hell this is.