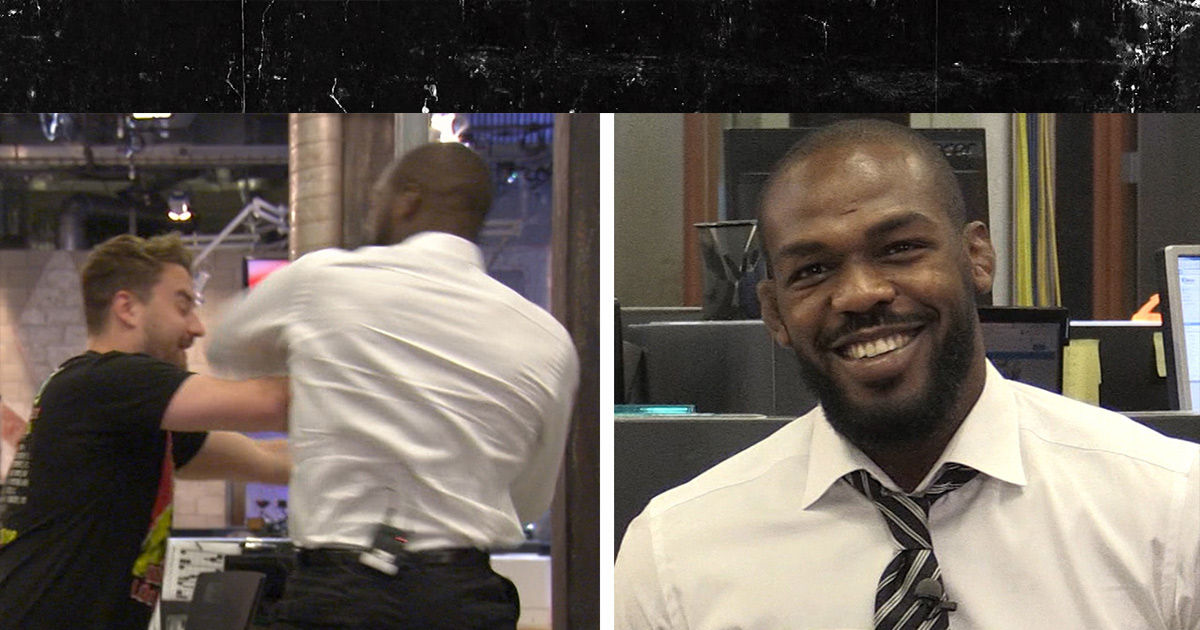 Here’s How Ya Throw An Elbow!

Well, good news, the reigning UFC light heavyweight champ came to our office and gave a live demonstration … right on a TMZ staffer!

Of course, Jones is gearing up to fight Thiago Santos at UFC 239 on July 6 — and he stopped by the office to talk with the guys from “TMZ Sports” about how he’s planning to end Thiago’s 4 fight win streak.

Jones hit on a ton of topics during the conversation — here’s a cheat sheet.

Jones doesn’t think Cormier will ever agree to fight him for a 3rd time.

“I’ve been hearing things about him fighting [Stipe Miocic] then ending his career fighting me down at light heavyweight, and I don’t believe him,” Jones says.

“I don’t think he’s ever going to fight me again.”

“I think it’s a lot of pressure for him to get down to the light heavyweight division, and then to get down there, to climb such a mountain and not get to the actual top? It has to be so crushing to come up short against me for a 3rd time, I don’t think he’d put himself through that.”

As for whether the two would fight at heavyweight, Jones says he would take the fight if the price is right.

“For the right dollar, I would, yeah. Because DC is a talented guy and if he were to have a better chance of coming up on top against me, it would be him comfortably at heavyweight. So, I think for me to risk so much challenging him at his comfort zone, it would have to make financial sense.”

Jones also says the animosity towards Cormier is fading away and he would even shake hands with Cormier if the two came face to face.

Jones says he’s trying not to disrespect Cormier anymore — saying, “Ultimately, in the history books people will know who was the dominant fighter out of us two and that’s plenty for me.”

Jones says it’s “great” that Conor is trying to get an ownership stake in the UFC — explaining that Conor is breaking down barriers for other fighters to cash massive checks through MMA.

Jon says he thinks the two could be headed for a scrap down the line.

“That’s not a fight that I necessarily want but that’s a fight that if it were to present itself I know it would be huge for everybody involved,” Jones said.

Jones says he would fight Francis in a smart way — looking out for power shots and trying to get him to the ground where he would have a solid advantage.

It’s not personal with Francis, he really likes the guy … but knows the payday could be huge.

“I try not to get overly impressed with these guys until they prove to me that they’re worth the hype.”

Jones notes that Walker hasn’t fought a Top 10 or Top 5 fighter yet, so he still has a lot to prove before getting a title shot.

“If you allowed me to fight the level of competition that he’s fighting, [the level of dominance] would probably look similar.”

“I’ll wait until he shows me a little bit more.”