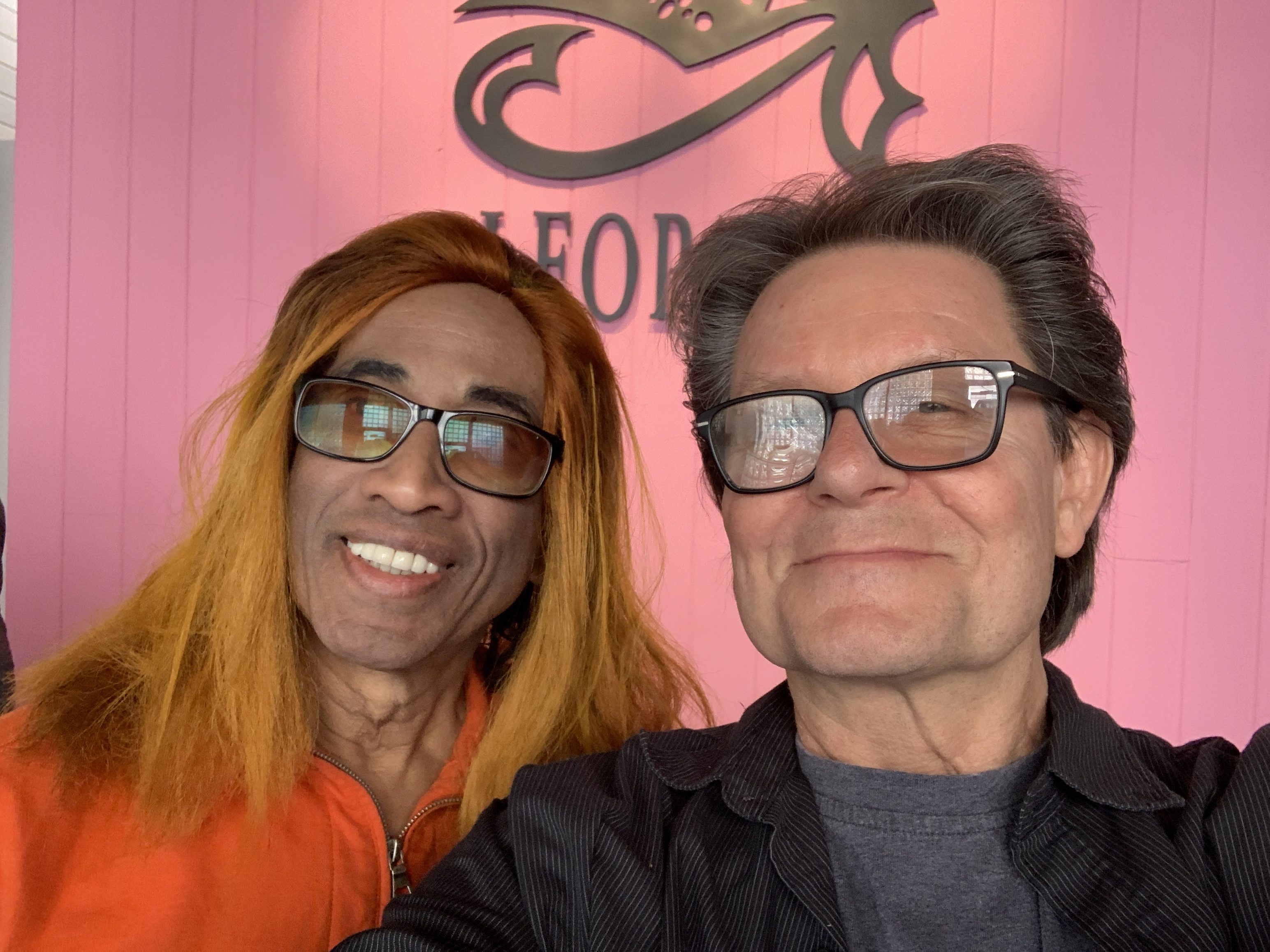 “Music is what tells us that the human race is greater than we realize”…. Napoleon Bonaparte

Grandmaster vocalist and violinist, L. Shankar and saxophone wizard and dilettante, Scott Page (Pink Floyd, Supertramp, Toto), have joined forces declaring an assurance of collaborative performances, recordings, and tours. Added to the alliance will be Jane’s Addiction drummer Stephen Perkins, guitar and vocalist Derek Day, guitarist Kenny Olson, founder of Kid Rock’s Twisted Brown Trucker Band, and Bassist Norwood Fisher from Fishbone. All are currently members of Think:EXP, the edgy band striving to bridge the gap between the human spirit and technological innovation with one of a kind live immersive concert experiences.

Considered a living legend, L. Shankar (aka Shenkar), has awed and delighted audiences all over the world live, and with his album sales numbering over 100 million through solo projects and collaborations. Born in Madras, Shankar was a child prodigy, performing his first public concert at age 7. Known for his creation and design of the first of its kind, 10 string, stereophonic, double violin, an instrument covering the entire range of the orchestra, Shankar also covers every genre known to man. He has collaborated or worked with an endless array of the greatest musicians of our time including: Phil Collins, Peter Gabriel, Bruce Springsteen, Van Morrison, John Waite, Stewart Copeland, Ginger Baker, Jonathan Davis, Natasha Bedingfield, Randy Jackson, Frank Zappa, Pete Townsend, Talking Heads, Echo and the Bunnymen, John Lydon, George Harrison, Michael Jackson, Madonna, Dave Stewart, and the list goes on forever. Shankar has also worked on numerous soundtracks including, “The Last Temptation of Christ” and has performed vocals on Mel Gibson’s “The Passion of Christ”. His haunting voice was featured on the hit series “Fear The Walking Dead.”

Scott Page is a phenomena. Each time he picks up the saxophone it becomes an epic moment. Musically, he is the saxophonist for the third most influential band in history, Pink Floyd, as well as Supertramp, and Toto, all of which are Grammy Nominated or Award-Winning bands. He has played with greats, exampling Quincy Jones, Diana Ross, and has been royally commanded to perform for Princess Diana. Having inherited a musical history before he was even born, Page grew up amidst stars like Judy Garland, via his dad Bill Page, a band leader, reed player and regular on the Lawrence Welk Show. At a very young age Scott first performed on television as a guest on Welk’s show accompanying his dad.

Aside from music, Page is an entrepreneur and a brilliant technologist, having unfolded projects inclusive of Walt Tucker Productions, an audio video post-production company, cofounder of 7th Level Inc., a CD-ROM game and educational software company, Direct2Care, an online healthcare presence management company, New Media Broadcasting Company, a social media and collaborative communications enterprise, and Think:EXP to name a few. He has also been named one of the top 100 “Coolest People in Los Angeles” by Buzz Magazine.

Together as “Double Headliners” these two music greats will be playing “The House of Blues” in Orange County on October 12th,  and Mars Rocks at The Globe Theater in LA on October 18th, 2019…..

It was an honor to have a conversation with music royalty….

The obvious question, how did the two of you meet?

Shankar: We met through the band Megadeath.

Scott: I’d played some gigs with Mike Albert from Megadeath and he was playing with Shankar.

Shankar: He was playing with my band and he spoke very highly of Scott. He thought we should meet so we made it happen. This was probably in 2006 or 2007.

Scott: We had talked about doing some recordings together.

Shankar: I was at a record company. They were going to sign Mike. They wanted me to work with Mike. Actually, Mike and I got along really well but I was not sure if the record company was reputable. I spoke to Mike on the side and asked him to be careful. He was a very nice guy and we always kept in touch. I took him to India, and he toured with me. He always spoke very highly about Scott,

Scott: I played some gigs with him, and then we eventually reconnected.

Scott: We also played together at The Surfside. Coincidentally, Perkins, Norwood and myself recorded on his album and then ended up doing the Wisdome show with Shankar. That happened to be our very first Think:Exp show in the dome, which was on November 17th of last year.

Shankar: We kept in touch and talked about doing some shows with a double billing, with both of our names. My album is coming out in March and Cleopatra Records wants Scott to do something on his own.

Scott: The idea of a double billing would be we would play with Shankar and then Shankar would play with us. In that case, Shankar would be performing his music, and during the next set we would be doing our music with Think. What we are doing is getting together and working on his tunes and then we are going to play some shows around Los Angeles. We’re going to do some fun, clubby gigs here with the idea of booking some stuff when he comes back, which will be more with the full band. On the 12th of October myself and Shankar will be doing a gig at the “House of Blues” in Orange County. However, the way we want to build it is with Perkins and us. We are going to want to put that together for a tour in Europe and Asia. Then we will be playing the “Mars Rocks” concert on October 18th at the Globe Theater with The Hailers and Revolushn.

So you will be going on tour together?

Scott: When I heard Shankar in the early days I was just blown away. He’s so unique and he brings that Indian flavor into pop music. Obviously, he had been playing with John McLaughlin, that’s when I first heard him, and then I recall  hearing him also with Peter Gabriel. I remember him doing “Passion of the Christ.” I’ve always been a major fan of Shankar’s even before I knew him. The opportunity to work with him now, is such a musical inspiration. For me it’s exciting to mash with this genre of music, as I’m not a traditional jazz player, I just enjoy creating my own sound as we go along. It’s fun to be able to infuse this kind of artistry and it’s really cool having Perkins add his beat and Norwood bringing that funk thing in. The four of us create an exclusive sound. Shankar has not played with Derek Day yet. I want to bring him in because then we will be able to mix it all up, and build something that will be extraordinary, fun and unique. Especially when Derek and Kenny Olson assimilate their own musical style.

Anything concrete with the tour yet?

Scott: Our team is talking to people in Europe and Shankar has some potential dates in India.

Shankar: We are working on dates in India and Norway and Sweden, all those areas too. My record company is on board to do the double billing as well. Scott is such an amazing musician, he can play anywhere. It will be fantastic to share the stage with him. He can play just about anything without hearing it. He just does an amazing job.

Scott: It’s really exhilarating and soulful playing with Shankar. That’s a big part of it. When you talk about this group each person has such a unique personality, and that’s what makes the sound so distinctive. We aren’t trying to be like anyone else, we are just being ourselves. Incorporating this with the double neck violin and those crazy scales (I really have no idea what they are) is really a blast!