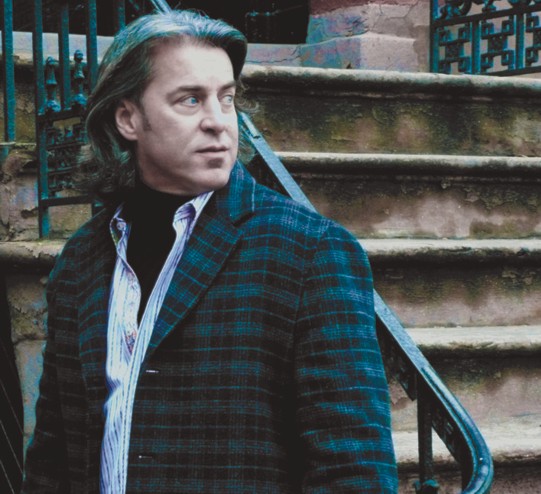 “Gravity is Failing” is bursting with improbable lyrics that caught my attention with the first line. It’s a near master class in creative lyrics for a modern pop song and familiar yet far outside the mainstream. It’s a top-shelf opening to Paul Mark and the Van Dorens’ eleventh album Gravity. Mark has spent many years writing, recording, and performing as a passionate adherent to working in the Americana genre. His last three albums, including this new release, has seen Mark take his songwriting and performances in a more theatrical direction. “Gravity is Failing” depicts a world turned on its head with equal parts insanity and moments of pointed scorn. Mark plays many instruments on Gravity, but this first track makes it clear his biggest instrumental contribution comes through piano. It’s a constant presence on this collection.

“I Spin When You Grin” won’t appeal to everyone, it’s much more light-hearted than the bulk of Gravity’s fare, but many listeners will welcome it as a change of pace. There are few shadows darkening these lines; it, instead, comes across as a full-on love song filtered through Mark’s peculiar consciousness. It certainly isn’t looking at making any major “statement”. He makes a wide turn back into more serious subject matter with the track “The Next Fight”. His blues soul comes through during songs such as this, especially through his well-aimed guitar work, and the line-by-line writing never fails listeners. It isn’t necessarily very original for a songwriter to latch onto boxing, but Mark utilizes that world in such tasteful understated fashion

He hits a definite peak with “Friend Gone Astray”. This song reminds me of Bob Dylan’s comment that “Tangled Up in Blue” was a song that took him ten years to live and a year to write. You can’t write a track like this until life has exacted some of its due from you – it isn’t so much that you need to experience life literally in the same way but possess perspective on how life’s regrets expand over time. The easy amble of the arrangement is led for the most part by Mark’s vocal and more exceptional piano playing.

You can’t hear the instrumental track “Coronation” without its implied partner “Con Man VIP”. Mark never puts a proper name to the song’s subject, but it is apparent early on who Mark is eviscerating. It’s another wickedly funny and lean lyric that Mark’s vocals bring to further life. The instrumental is slight when taken on its own but, paired with “Con Man VIP”, it works as an evocative introduction. “You Can Take It with You When You Go” has Mark in heaven and finding just as crass and commercial as the world “below”. It’s wonderfully cynical without ever coming off as distasteful and rates as one of the album’s best songs.

Gravity has few weak points. Mark’s songwriting has several easily recognizable reference points but labeling his songwriting as any sort of imitation is an error. He inhabits the same milieu as a handful of other popular songwriters, but he has an unique facility with language and his characters stand as creations all their own rather than cardboard replicas of his betters. Paul Mark is pushing his talent into new areas and the foray produces a bounty many listeners will appreciate.