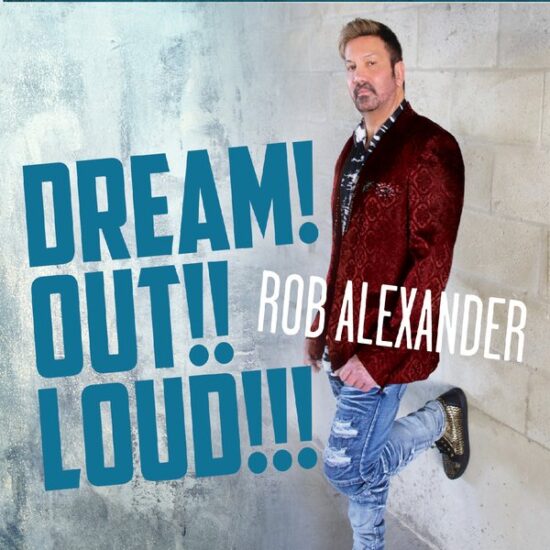 Cutting through the tension created by Rob Alexander’s well-woven lyrical structure in “Nothing to Be Afraid of Now,” we discover the sizzle of an electric guitar lead as powerful and searing as they come. There’s already something seriously contagious about the beat in the background, but topped with this bit of sonic ribbonry, the track definitely transforms into one of the greatest highlights to behold on Alexander’s new album, Dream Out Loud, set to debut in 2021.

While not quite the sparky example of dance prowess that “La Flambeau” is, “Nothing to Be Afraid of Now” is very much throwing the spotlight on the versatility of its singer. The same could be said for the fire-starting dance track “Instant Sex” and its rockier counterpart in “Look out Below,” but there really are no two songs in Dream Out Loud that follow the same formula to the letter. This is a record that screams rebellion on every level, and coming from an artist as adventurous as this one happens to be, I think it’s telling us exactly what we’re to expect from Rob Alexander in the 2020s. Is it his most well-rounded work ever? From my perspective, I do believe it is.

When you’ve got a pulverizing groove as sweet as the one in “Kings and Queens” is, you don’t need to worry about creating depth on the bottom-end – actually, I find the crisp stylization of the song’s signature melody to be one of its most defining (and exciting) components. “Angel and Johnny” is also mixed with a sharp ear for the subtlest of details, but if it’s absolute melodic elegance that you’re hungry for this winter, it doesn’t get much better than “A Song to Get Us Through.” This tune, along with the spicy “Hot Potato” and vivacious title track, could be some of the most deliberate and well-placed indulgence Alexander has invited into his sound to date, and I don’t think I’m going to be the only critic saying so by the end of this season. “Game Over” is the polar opposite, a product of minimalist efficiency, but its effect is much the same as its heavier neighbors here.

From “Yesterday’s News” to the hot n’ heavy grinding of “Instant Sex,” Rob Alexander never lets up on the audience in Dream Out Loud – he keeps coming back with a harder attack around every corner. Ballads and slow songs get as much of his heat as the fast-paced club material in this LP does, and if you’re wondering when I’m going to break down the filler in Dream Out Loud, I’m not; there’s none to really sift through here. This album comes off as a personal exhibition that doesn’t care what a critic thinks of it, and for this reason its dance-themed vibes sound more like a beacon of resilience in a post-COVID pop scene than they do a direct response to the style of music his rivals are producing. To me, this is the best Rob Alexander album you can get your hands on, and it’s one of my favorite new listens this January.