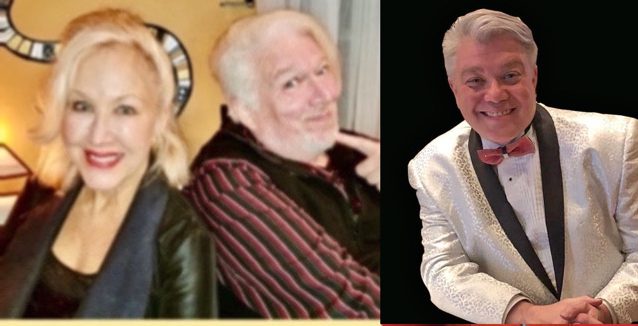 Who else but hosts Wendy Stuart and Tym Moss could “spill the tea”  on their weekly show “If These Walls Could Talk” live from Pangea Restaurant on the Lower Eastside of NYC, with their unique style of honest, and emotional interviews, sharing the fascinating backstory of celebrities, entertainers, recording artists, writers and artists and bringing their audience along for a fantastic  ride.

Richard Skipper will be a featured guest on “If These Walls Could Talk” with hosts Wendy Stuart and Tym Moss on Wednesday, September 1st, 2021 at 2 PM ET live from the infamous Pangea Restaurant.

Wendy Stuart is an author, celebrity interviewer, model, filmmaker and hosts “Pandemic Cooking With Wendy,” a popular Youtube comedic cooking show born in the era of Covid-19, and TriVersity Talk, a weekly web series with featured guests discussing their lives, activism and pressing issues in the LGBTQ Community.

Tym Moss is a popular NYC singer, actor, and radio/tv host who recently starred in the hit indie film “JUNK” to critical acclaim.

2021 marks Richard Skipper’s 42nd year in New York. He is an entertainer, MC, HOST, Interviewer. His show Streams on Most platforms. Under the guise of Richard Skipper Celebrates, he has conducted over 1000 interviews celebrating people in the arts. Interviews have included Joyce Bulifant, Mindy Fradkin AKA Princess WOW (The Smile Revolution), Actor and Animal Trainer Brian Michael Hoffman, designer David Josef, Lesley Ann Warren, Ruta Lee, Carol Channing, London internet sensation Debbie Wileman, Julie Wilson, Melissa Manchester,  and Del Shores. This past year, he launched his podcast/Live stream interviewing people from all sides of the arts and literary worlds. He is featured in the January/February 2021 issue of Cabaret Scenes, was nominated for a Broadway World Award for his ongoing online series, and was selected one of the heroes of the theatre by Encores Magazine.

Under Richard Skipper Celebrates!, Richard’s guests included Beth Fowler, Carole Demas, Ann Kittredge, Stuart J. Allyn, Marilyn Maye, Melba Moore, Lee Roy Reams, Jana Robbins, and Stacy Sullivan among others. A tour-de-force Cabaret show with top names in musical entertainment meeting to talk and perform, with songs, stories and recollections of lifetimes and moments in show business, each show was designed around the particular date when it was scheduled, and featured special guests who choose songs from the past and recent history of both Cabaret and Broadway that had a relationship to that date, and shared their own stories and journeys in an intimate cabaret setting. Beck Lee from Media Blitz described the experience as, “Joel Grey crossed with Charlie Rose, with a soupcon of Bette Midler thrown in for good measure.” He interviews and writes under Richard Skipper Celebrates celebrating artists and their body of “worth” with a huge platform and followers.

Richard continues to raise money for many worthwhile causes, especially Arts in Education, The Actors Fund, GLAAD, and The Broadway Mentors Program.

Richard is currently writing a ‘living book’ on the history of Dolly Levi… focusing on Hello, Dolly! with Carol Channing to the most recent national tour starring Carolee Carmelo. Check out www.CallOnDolly.com for more information. Richard is available for online presentations on the history of this show.

Watch Richard Skipper on “If These Walls Could Talk” with hosts Wendy Stuart and Tym Moss on Youtube here:

Subscribe and listen to “If These Walls Could Talk” on Apple Podcasts/iTunes here: