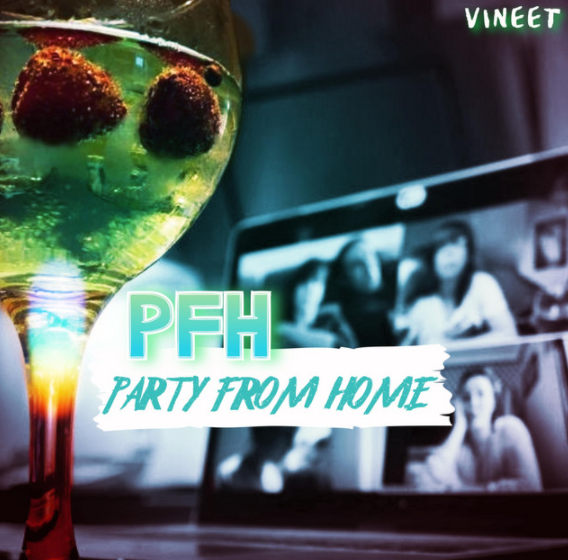 Party anthems seem to have the same narrative and visual theme when reimagined as music videos, but while some are content to do the same things their rivals and influences just did, Vineet wants to blaze forward in the new single “PFH,” shorthand for party from home. “PFH” invites us into a TikTok-style collage of images and clips that summarize the real look of a COVID-era dancefloor, and while the aesthetics are pretty cheap and simple, the concept itself is anything but. Vineet thinks about intricate elements of his music, and thus, the videos are bound to be provocative in some way or another.

The lyrics are relatively simple in “PFH,” and I don’t personally see where making them complex or over the top would have done this single any favors. From a creative standpoint, Vineet is issuing plenty of swagger through the verses, and to have done something more might have been to invite a lot of unwanted indulgence into the backend of the song where efficient, cool lines belong. Nothing here sounds rushed but instead crafted with the kind of bottom line that used to be more common in pop music ahead of the internet’s advent and the death of scenes as we knew them.

Vineet has quite the history with critics, but if you’re into the indie beat, you already know his is one of the most credible brands in the game right now. He’s a bottom-top conceptualizer who refuses to go halfway on any of his projects and based on the full-bodied feel of this release, there’s a lot of evidence to support this being but a taste of what he can really do when his creative whims are leading the way. “PFH” isn’t just a celebration song – it’s telling of what is still to come for this creator.

Even the Grammys can’t seem to leave Vineet alone, and this is likely why his name has remained so relevant in the press whether he’s dropping a new single or not in 2021. Beyond being a darling of the critics, his acclaimed sound has a buoyancy missing from most of the similar content I review, and it’s enough to elevate this material to the level of elite players from Bruno Mars to Adele. Some are just destined for the big time, and I believe this can be said of the man responsible for this song’s arrival.

I love where Vineet is going with his music, and whether you’re new to his sound or have been following him for a long time now, “PFH” is a track that you need to sit down with a lot sooner than later this November. Vineet doesn’t wait for the groove to produce all the chills here; he’s coming at us with melodic moxie and a sly hook that is almost guaranteed to draw a reaction out of anyone within earshot right now, which is something I would like to say about the vast majority of his contemporaries in and out of the underground right now.