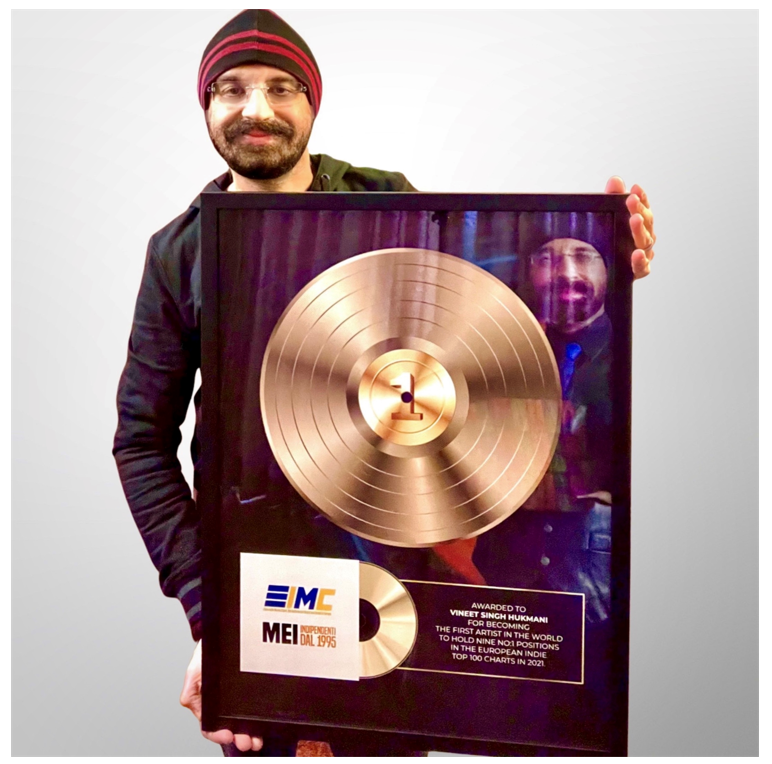 Everyone has handled the COVID-19 pandemic differently. It has and continues to be a difficult experience, in large and small ways, for us all. Indian born singer/songwriter Vineet has responded to its challenges by throwing himself headlong into new work producing nine number one hits on the European Indie Top 100 during 2021. Tracks such as “Can I Go Now?”, “Dreaming Out Loud”, “Turning Back Time”, and others have served as musical lifeboats in a time when everyone feels at least a little adrift.

Such productivity has not gone unnoticed. The European Indie Music Commission and Mei Indipendenti awarded Vineet a Gold Disc plaque for his accomplishment. It recognizes his achievement of setting a record for being the first artist to enjoy such chart success. The near three decade long history of the Commission’s chart derives its rankings from global airplay statistics and listeners votes making it one of the more substantive such charts today.

He isn’t an overnight success. Vineet Singh Hukmani’s journey through the popular music world has carried him through being a performer and behind the scenes figure. His recent run, however, demonstrates beyond question where his greatest gifts lie. He’s scaled these lofty heights through hard work, pushing a relatable message, invigorating music, and an appealing vocal presence.

Some of the work he has produced during the last year is particularly notable for its artistry. “Jab the World” is the song of an artist responding to the mood of his times. It isn’t a song simply about inoculation, about the COVID-19 pandemic, but also an earnest cry from a man who looks all around, sees hate rising at every turn, and wants it to stop. Many of us can relate to experiencing similar emotions under a variety of contexts.

It is not messaging alone, however, that has earned him such honors. Vineet’s music surges with youthful energy, embraces the NOW as much as fundamentals and crackles with personality. Nine number one hits need more than a timely exhortation to gain mass audience approval and Vineet answers that need with physical yet intelligent music.

It covers a range of styles. You can’t successfully pigeon-hole someone who records nearly ten hit singles in the space of less than two years because, obviously, there is too much diversity at play. Vineet is as home essaying the synth-laced rock of the aforementioned “Jab the World” as he is tackling the less anthemic strands of tracks like “Hurry”.

There’s nothing in his recent singles signaling him slowing down or a drop-off in quality. Vineet has long since established himself as a known commodity in the music world but his work through these trying times has lifted him to another level. It’s what artists do. They dramatize life for us in the form of song, providing catharsis in some form, and we are better off with performers such as this filling our airwaves. He’s connected with his audience in ways few others are and those nine number one hits attest to it.